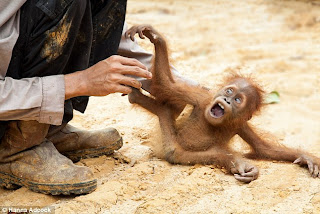 http://www.dailymail.co.uk/news/article-2209243/Mother-baby-orangutan-threatened-march-oil-plantations-Sumatran-forest-tranquilised-taken-safety.html
\
A mother and her baby Orangutang were rescued from what used to be their home but is now being turned into forests of palm trees for our benefit. The pair were starving. The mother had air rifle pellets under her skin from previous encounters with humans. The Orangutangs were relocated to a protected national park.

Four more rhinos were killed for their horns in South Africa. 4 Rhinos were dehorned by poachers in India, 2 died from their wounds. The Indian rhinos had their horns hacked off while they were alive and conscious.

Outrage is not enough for these innocent and defenseless beings. Our charities and good will cannot undo what has be done to them. All that can be done now is to ensure that we stop doing what we are doing and create a new path forward, a path that would satisfy the followers of Christ, Allah, Buddha, The Many Gods of the Hindi, The Ancestors - a path in which we love our neighbours as our brothers, in which we treat all life with respect and dignity - as we would want to be treated, a path in which we nurture the Earth and take only what is required, a path in which a life of comfort and dignity is assured for that is what we freely give to each other.

Where are the religious followers in these acts of brutality against those who cannot protect themselves? Are they the perpetrators or do they simply look on from the sidelines? For a society of apparently "evolving" and "enlightened" beings, we sure have turned life on Earth into Hell - and it's getting worse every day.

Will we be able to recognise that we must stop living this way, before it is too late - or may it already be too late? It seems, I fear, as if we will not turn from this path of self-interest - and we will pay the ultimate price.