A woman from Nkandla was rescued by police yesterday after escaping from a container in which she and 11 other abducted women had been held and raped... The woman told police that one of the women in the container, who had tried to fight her rapists, was shot dead. She said 10 of the women were still being held captive in the container and raped daily.

The suspects are still at large. 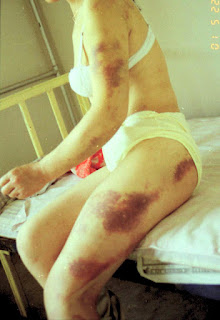 Let's face it: sex is a big part of our lives - we spend a lot of time trying to get laid or thinking about getting laid. most crimes are committed because of sex or money (or sex and money). The problem is that when sex become the motivating factor behind our thoughts, words and actions then we are liable to screw ourselves over, as well as other people. When getting some nookie is more important than supporting life or even developing safe and supportive sexual expressions, then there is a problem. Sexual obsessions and possessions mean that people are going to be partaking in abusive sexual practices - firstly because we don't understand how our thoughts can and will lead to physical manifestations, and secondly because, in our minds, satisfaction of our ever whim is more important than another being.

Maybe we are too far gone to make a difference. Maybe we are doomed to rape, mutilate and kill each other on a poisoned Earth. Maybe the elite will simply cut off the money supply and starve us out. Maybe our natures are irreversibly evil. Maybe we missed our chances to change. The thing is, if we don't try, it would simply prove the point.