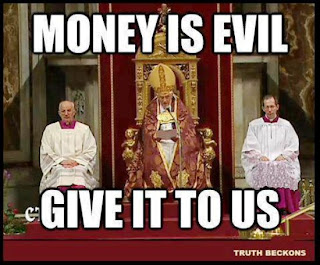 Did you know that members of certain religions in a few countries have to pay a "religious tax" to be able to be a member of their chosen church? I just discovered this nifty little fact.

According to the article above, Germany's Catholic Church will deny religious burials and Communion to any members who do not pay the Church tax: A newly-enforced German bishops' decree says anyone failing to pay the tax - an extra 8% of their income tax bill - will no longer be considered a Catholic.

Could this be proof that religion is simply a way for lazy people to live long and comfortable lives, molesting little boys and being looked upon as a wise leader of the community - who wants YOUR money! The wealth of the Roman Catholic Church has long been a source of memes and facebook photo's, where people point out the hypocrisy of the teachings of the church in contrasting photo's of the Church's wealth alongside starving children. Germany's Catholic Church saw a decrease in membership of 181,000 in 2010 and 126,000 in 2011 - allegedly following all the sex and molestation scandals that were swept under the rug. Or, maybe people just can't afford to go to church anymore.

In this unpleasant economic time, people are cutting back expenses and luxuries - apparently the concept of an intermediary to God who demands your money is becoming less appealing.

In any case, I thought that Jesus and God and the Bible taught to be kind and caring and giving (when it's not teaching to be spiteful, take revenge, an eye for an eye and what not) - so why are these Christian leaders demanding this tax in a cash-strapped economy amidst a scandalous scandal - oh right! Of course they must be deciding to live according to the spiteful and mean things the Bible says when it comes to their salaries.

If people are dead intent to have religions to justify their miserable existences, the religious leaders should at least receive no salary and jewels and gold and such - for then how are we to know the true reason of them choosing this vocation? For all we know, the bishops and priests and pastors and rabbis have chosen their job due to its relatively low commitment requirements and the chance to touch a bunch of boys.

The entire religious thing baffles me, really. People are obsessed by their labels (Catholic, Protestant, Muslim, Buddhist, Atheist, Agnostic, Mormon etc etc) and are willing to start wars and protests and riots at the slightest "insult" - as if they feel the need to prove that they are truly devoted so that their amazing and "forgiving" God will let them into heaven or give them a bunch of young girls to rape, I mean virgins to bless.

And so I maintain that religions are nothing but vehicles for men to become fat and happy whilst also serving the elite in sheepifying the people into a religious haze of foggy reasoning and quick tempers.