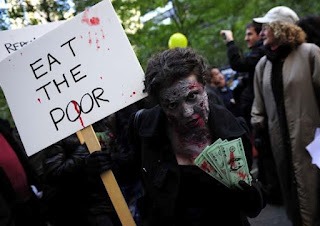 Just think, while we are sitting at home, calculating whether we'll be able to pay all our bills and buy enough food, these guys are actually richer than they have been in years. Somehow, this doesn't quite add up. Think about it for a minute: $1.7 trillion, divided between 400 individual people... Yup, something is terribly wrong here.

This entire economic structure is the perfect setup for the elite to rule the world while the rest of us fight over scraps and try not to get kicked in the face. We watch these movies about oppression like The Matrix and V For Vendetta and we think to ourselves "well, aren't I glad that I have rights and freedom! The world will never get that bad!" - not realizing that we are already that bad, it's just not so in-your-face.

There are an estimated 20 - 30 million slaves in the world right now (http://thecnnfreedomproject.blogs.cnn.com/2012/09/19/bedouin-successes-fighting-people-traffickers/?hpt=hp_c1) - I bet you didn't know, or even expect that. How many countries are currently experiencing some form of unrest or war? almost half of the countries in the world. Most of Africa, chunks of Asia, parts of South America - there are atrocities being committed daily and we don't even know it!

In the wealthier countries, people are becoming more and more psycho, killing animals, chewing faces off, raping, murdering, kids killing there family members - what's it going to take for us to realize that there is something terribly wrong with the way we live?

We are trapped and enslaved to our belief that we are free. How can we be free when we are not even willing to look outside the box and consider that the way we have always lived is not actually the best?