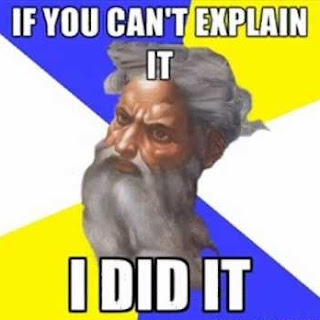 I am certain you have heard of this phrase: the favor of God. Here is a quick link that will explain the Christian use of the phrase: http://www.learnthebible.org/favor-of-god.html

So, according to these guys, one may obtain the favor of God by doing certain things. Now, if one acts and lives in order to obtain the favor of God for purely selfish reasons and with a self enriching strategy, will they still get the favor of God, or will God tell them to F-off? If God does grant His/Her/It's favor to someone who has acted purely in self interest, does that mean that God is an egomaniac/narcissist/whatever? I ask these questions with good reason: God seems to grant His/Her/It's favor to all sorts of sleazy and selfish people and very little to those who truly try to make a difference - does that mean that God prefers the attentions of mean people? Or does God just want the most adoration He/She/It can achieve, no matter who it comes from? God truly seems to be an illogical kind of entity. I really don't see any kind of sense in what people interpret about God. Maybe it's the humans that are wrong. Maybe the humans just wanted to believe that we will be rewarded with favor no matter how evil we are, as long as we follow a few basic guidelines.

I have another question: what about all the people who have incurred God's wrath and are living really miserable lives? Why does God see fit to punish them, especially when they are mostly innocents? There are many poor people who are very devout and follow some of the interpretations of God's will to the letter, and yet they do not receive God's favor. Why is that? Maybe they are interpreting incorrectly.

I am led again to the question of: if God rewards those who please Him/Her/It, then why do so many innocents (majority of living beings) live in misery and slavery? Did they really make Him/Her/It that angry? Or is it just a case of God testing their resolve? (Or just 'cos). And what if these people have never heard of God or Christianity, is it fair for God to punish them for that?

God's favor seems fickle to me, since there are child molesters, rapers, murderers, dictators and tyrants ruling the world - the rest of us don't really have much of a chance or choice to live the way we'd like, because then we'd probably starve. Would God's favor then give us food?

Remember, people: God is a figment of our imaginations and we are all living in an imaginary world filled with imaginary things we treat like real things, like money.