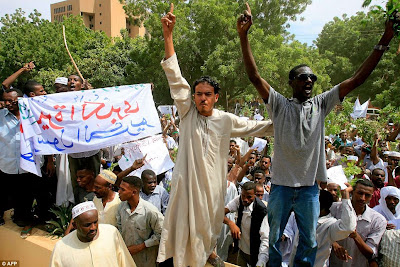 So Muslims are going totally nuts about this American movie that previewed on YouTube - apparently it depicts the Prophet Muhammad in a certain light that is offensive. So there's burning and screaming and chanting and protesting and demanding and all sorts of outraged behaviour coming from Muslims all over the world.

I have only one thing to say about this debacle: we are screwed. We are so totally fucking ourselves into war and shit, it's absolutely not funny. Everyone is outraged and offended by everyone else because everyone wants to be right and have the right to believe they are right and be allowed to feel that everyone else is wrong and that anything that contradicts their opinion is an affront to their basic human rights. I wish people were this motivated when it comes to feeding the hungry... Just imagine it: Every person taking up a banner to stop hunger and abuse. Every person chanting for the education of our children. Every person demanding that life be valued above money. Every person protesting against inequality and discrimination. Every song promoting respect and compassion. Every person burning the junk that has been ruling our lives with it's monetary value, distracting us from giving a shit.

Now that would be a sight to behold.

But no, people will only be outraged when their own opinions and money is at risk. Every religion is the same: pray to God and live well so that you can go to Heaven, mixed in with a bunch of contradictory (and unreliable) messages coming from people who claim to have been visited by angels and that they were impregnated by ghosts and what-not. The whole concept of religion is fanciful - I mean really.

Religions have been used as the excuse for some of the most horrifying actions in history and in modern times. Everyone claims to be acting according to God's wishes, but their actions speak of self-serving motivations. Not to mention the habit of religious people picking and choosing what to believe and live by from religious texts and what God meant in particular passages. Strangely enough, no one chooses to live by the phrases such as "love thy neighbour", "do unto another as you would would like done unto you", be merciful, be compassionate, care for those around you. No, people would rather read the bits about fighting and punishing and vengeancing and scorning and mocking. Talk about selective hearing.

While the Muslims are having their righteous outrage-fest, America is posturing for war and all the other countries are just cringing. Have you noticed how half of the news stories today broach a subject that could lead to some big ass war? China and Japan are circling each other like fighting dogs; America is scolding whoever makes the headlines; the Koreas are still having a shouting match; half of the Arab countries have nukes according to the UN and Africa is tearing itself apart. All of this is because us humans, the most amazingest species upon this Earth, are obsessed with being right and being special and being the bestest.