September 12, 2012
A teenage boy may have committed a Satanic suicide, according to the South African newspaper The Post. The boy was found hanging off a rail in his bedroom, with "strange symbols, an incision and a blood smear". There were symbols painted on his bedroom wall and there was also an incision to his chest with blood smears around it. 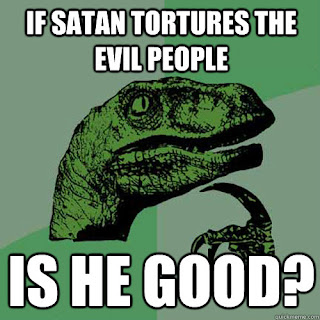 I have done a little light reading and according to Wikipedia, Satanism is not so bad. There aren't any connections made to rituals or cults or anything - but apparently The Church Of Satan is all about self-indulgence and self-fulfillment. Another aspect of Satanism is that it is supposedly the "true/first religion of man" and that it predates Christianity. It seems as though the Christians labelled any opposing religion (like pagans) as satanists in order to weed out the competition, basically. According to The Joy Of Satan, Satanism involves some serious meditation in order to elevate oneself and to advance spiritually. Also, Satan and demons have totally been misunderstood.

Many Satanists believe that Satan was a rebel and like him for it. Others believe that he is the true God. In Judaism, satan means "the opposer". A recurring theme seems to be that Satanism is used as a distraction to get people all riled up at not the real problems in society. Every now and then a newspaper article gets chucked out with Satanic rumblings and the community goes up in arms.

The essential bits of Satanism are that it is basically a new-age self-enlightenment movement that is often (deliberately) misunderstood and used to distract people from the real problems of the world.

So for those who do believe in the gory sacrificing version of Satanism (including the sacrifice of self as suicide) - what is their intention behind their actions and beliefs? There are only 2 options: either they believe that Satan will improve the world and therefore wish to empower him/her; or they believe that the world is not fucked up enough as it is and needs a little more pain and suffering. Either way these people are not overly clear in their assessment of their situation and the world and I must conclude that they are self-centered little a-holes not dissimilar from every other a-hole who thinks love will save us from this impending (self-inflicted) doom, or that Jesus loves us but is gonna kill us all anyway, or that animals are not living beings, or that the rainforests aren't important anyway.