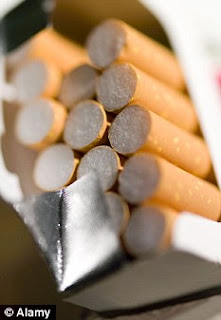 People are trying to cut costs wherever they can - if that means smoking illegal cigarettes, then that's what they will do. Smoking may be a touchy subject in terms of all the health propaganda surrounding it, but those who smoke do so willingly in a world that doesn't have much for one to enjoy.

When one initially faces financial difficulty, the first things to go are the "for personal pleasure only" costs, such as going out, buying chocolates, new clothes and so on. When things get a little tighter, the next things to go are those things we can survive without: nice car, smoking, private school, nice place to live... But when things get really tight then we start to cut on the things that matter, like food.

Will we be moved to act in time to prevent these inevitabilities? I don't think so. If the current state of affairs does not move us to act, then there is nothing that will change in time for it to make a difference. The only way we will change at this rate is after something happens to us that will affect our quality of life enough to move us to make a change. We seem to be incapable of self movement. The information is here for us to educate ourselves with.